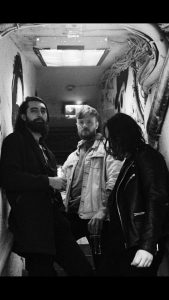 What was the first album/single that you ever bought?

Afroman – Because I got High, my Ma didn’t know what she had gotten herself into when I was aged 6.

What is your earliest musical memory?

Sitting in the back of the car and hearing the start of Hells Bells by AC/DC, being confused to why the angelus was playing so late at night.

Is there a particular song/band/singer that made you want to be a musician?

When I was around 10 years old, my Ma bought Led Zeppelin – Song Remains the Same tour dvd. On this dvd John Bonham performed Moby Dick, from the moment the first snare roll hit, I fell in love. I knows from that point I wanted to play the drums. An instant flash went off in my head and I became infatuated with the power behind his drum playing. I played the dvd to death re watching this one section of the gig.

Is there a song/band that you love that was introduced to you by someone else?

There has been so many to mention over the years, but I think one of the most recent was being shown the stone roses first album. Reni has a special groove when playing that suits the madchester sound that they went on to create, I learned so much from listening to that record back to back.

Is there a song whose lyrics resonate with you and why so?

One song that has always stuck with me has been Vincent by Don Mclean. It resonates well with an acquaintance who died a couple years back, when I hear the song I can’t help but think of her. The lyrics “When no hope was left inside on that starry starry night, you took your life as lovers often do, but I could of told you Vincent, this world was never meant for one as beautiful as you”.

The band/musician that you grew up listening to?

From the many trips around the country with my parents. A lot of Led Zeppelin, Talking Heads and AC/DC.

What song do you wish that you had written and why?

Most likely “All I want for Christmas is you”, Mariah Carey doesn’t do much else throughout the year does she?

What song transports you back in time and why?

Not a song as such, but the whole album Currents by Tame Impala, brings me back to being twenty one, sitting in Stephens green surrounded by some old friends.

Which song makes you dance when you hear it?

Gotta be Don’t Leave Me this way by Thelma Houston. Can’t help myself when it plays.

Which song makes you sad when you hear it?

Crazy – Patsy Cline, tear jerker for the broken hearted for sure.

What was the first gig you went to?

First gig I ever went to was, Guns n Roses live in the RDS in 2006, I went with my ma. Had to lie to school to say I was sick so I could attend and ended up missing that years school tour. Was it worth it? Yes, yes it was.

What was the first song that you ever performed?

The first song I remember performing clearly was traditional Irish version of Wonderwall played on a tin whistle. I know I know. Not my choice but I do play a mean tin whistle.